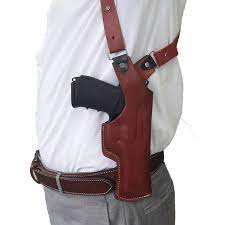 The History of Shoulder Holsters

It is fascinating to know that modern weapons have frontier ancestors. The same case is with shoulder holsters, which were designed for concealment and have come a long way, incorporating all kinds of modifications. This article takes you to the history of shoulder holsters in a quick read.

The gun-carrying cases that you see in the US cop shows, worn by the cops over and across their shoulders are the shoulder holsters. These are iconic for their appearance as well as their efficacy. Shoulder holsters are not just for TV rather, they are very effective for people who work with both hands, drive for long, and have to carry the gun in a concealed way. While shoulder holsters are very popular among cops, civilians and criminals also see them as a concealed carry advantage ideal for small weapons.

If you think shoulder holsters are modern and made by gangsters, you’re wrong. These were created by Old Western shootists for concealment, avoiding unwanted attention. That holster was pliable, half pouch, contoured, made out of single-ply leather which was sewn or riveted into a back panel much heavier than itself. The earlier rigs were secured in their place by a shoulder strap that had a narrow strap fixed to another harness. There was no securing strap in those holsters, which made it difficult to draw out the gun and slower than usual.

Later in towards the 1870s, it is said that the earliest type of shoulder holster rig made its debut. The rig was in Texas pattern, which was the most common type of shoulder rig used. Coming to the late 1890s, a new shoulder holster style came up, which was stiff, consisted of a two-ply backing with a leather-covered band or strap that would support the weapon’s weight. This design was largely exposing. Therefore, the early 20th century witnessed the appearance of Half Breed shoulder rig, which quickened the draw and concealment of the gun. This design surpassed its predecessors and served as the base for today’s modern shoulder holsters.

Shoulder holsters are a great option for concealed carry. Looking at your daily routine, gun type, dressing sense, and surrounding situations, you will find that shoulder holsters are very handy, especially when you need to carry extra magazines or extra guns. For cops and professionals, it is easy to draw the gun and make large movements efficiently. For sitting and driving or constant working, you are at an advantage with shoulder holsters.

A shoulder holster can be customized as per your requirements. Extra pockets for magazines and small guns can be added to the straps in a concealed way that is easy to carry comfortably. For instance, you can hold one gun under each armpit and have up to four extra pockets for magazines or knives. The weight of the holster varies according to the items you’re holding.

PrevPreviousHow To Create A Christmas gift baskets: The Ultimate Guide
NextWhy You Should Hire a societe de ménage (housekeeping company): How It Helps Keep Your Home CleanNext
On Key